Article about “The Imminent Implosion of Grassfed Beef”

This is a great article by Walt Davis about grassfed beef and how NPR interprets various things from the grassfed beef industry to climate change:

We attended the 2014 Grassfed Exchange conference in Columbia, MO Wednesday through Friday. What an excellent line-up of farm tours on Wednesday and speakers on Thursday and Friday! Here’s some photos from the farm tours. 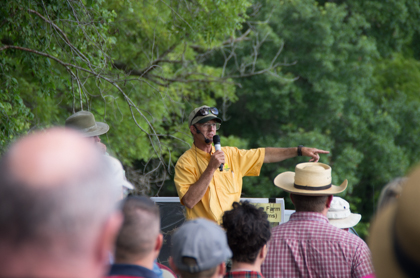 Greg Judy telling the crowd what we would see at his farm tour.

END_OF_DOCUMENT_TOKEN_TO_BE_REPLACED 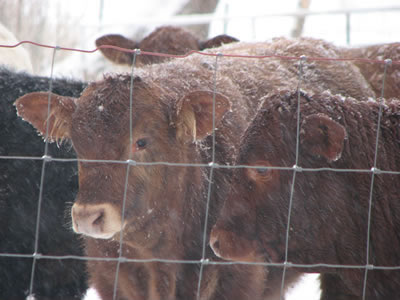 The forecast hasn’t mentioned accumulating snow, but we are getting it this afternoon. I think the calves are a little unhappy with the turn of events!

When we went out to check on the cows after our return we were happy to see that we had two new calves. That’s the great thing about these old cows, they’ve had enough calves you don’t need to worry much about them having problems! In the process of moving them to a new break of grass, we let them water up. This last cow was drinking when we got to looking and saw her calf very actively kicking around! We thought maybe we’d finally found a video which might go “viral” on YouTube! 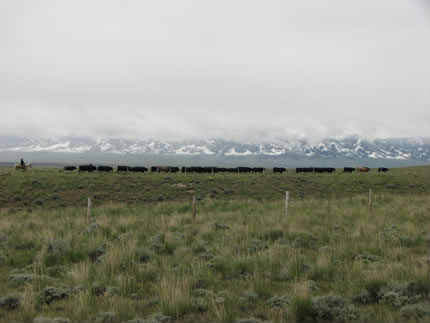 On our drive through Wyoming today we spotted two cowboys driving this herd of bulls along the highway against the backdrop of these mountains. What a great world we live in!

Zebra and Cattle Together

Today we toured the Hearst Castle near San Simeon, California. W.R. Hearst had, at one time, a zoo on the property. Today only a few "zoo" animals remain including these zebra who run right with the cattle. We had such a hard time resisting the urge to walk out and take them all for a drive! 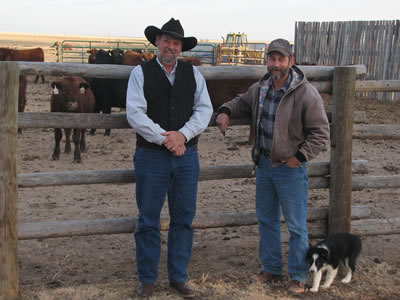 Tina and I had a chance to visit with Kit Pharo of Pharo Cattle Company this afternoon. We’ve met at other workshops and visited on the phone a lot, but this was our first chance to see his ranch and cattle. What a wonderful place!

Last week was the third chance I have had to work with someone’s newly weaned calves. The most recent group was a group of just weaned the day before I saw them Charolais cross spring calves. These calves had not been handled at all to speak of, other than they had been moved from one pasture to the next every third day or so. The owner called me complaining that his water tank floats were leaking, hissing and not shutting off. I had not visited with him in a while so I said I’d come over and have a look. We took one of his two leaking floats apart which both were in his corral where the day before weaned calves were bawling and walking the fence. Fixed the first float while the calves came up and drank out of the tank we were working on. Took the second float off and fixed it all the while the calves walked back and forth totally concentrating on their terrible predicament.

After both floats were fixed the owner said he couldn’t believe how the calves did not seem to be bothered by me being there. He said, anyone else comes and they head for the back corner. I said, well looks to me like they just need a walk. He smiled not knowing what to say and said he would watch and learn. So, I proceeded to walk the calves around the small lot next to the corral a couple of times and drove them straight into the corral where several got a drink and then I drove them out of the corral and back into the lot. I drove the calves around the lot a couple more time and placed them at the farthest corner away from where they wanted to be earlier. The owner and I stood and talked for probably 10 minutes and the calves never moved. He said he thought he could find time to walk them again that same day and maybe a time or two the next.

I had a chance to visit with him a couple of days ago and he told me he had never had calves that weaned that easily. None sick, no runny noses all eating and doing very well. He said those little walks had made a lot of difference in these calves. The floats work right too.

This is the third time I have had this result with other people’s calves.

This was my last walk with the (formerly) wild calves.

Through the gate nicely.

“Smile and Mean it, the Bud & Eunice Williams Story”