Although Richard and I have “wet” fly fished for many years at a local trout park, we had yet to experience “real” fly fishing, and we certainly weren’t prepared for a day of fly fishing on the South Fork of the Snake River August 19. But, never fear, our guide was there to assist us!

Grey, a very patient and knowledgeable young man, knew the words to say and the way to say them to get across the greatest knowledge in the least amount of time. After all, we were just going to be on the river for about eight hours, and he had to help us catch fish to make our day complete (and help encourage us to come back).

Grey said there are basically ten main points to fly fishing. Although he didn’t actually line them out, at the end of the day I came up with the following list, how they helped us catch fish, and how they can also help us be better stock-handlers.

“The first hour we will be learning the techniques.” Grey carefully repeated items from the ten main points again and again. “Cast, cast again, mend, mend, mend again, mend, strip line, cast again” on and on in the same, calm, quiet voice (where did he get his patience?). The first few hours using Proper Stockmanship are much the same, though we aren’t there to repeat the few techniques in your ear. “Move in straight lines, don’t pressure straight behind an animal, pressure toward the head, not that far, back-up, try again, yes, that’s the spot,” again and again until it becomes natural to you.

“You have to put your hook where the fish are.” This was the key point Grey made about successful fly fishing. Yes, your casting skill and the type of bait does mean a lot, but if you are making the most perfect cast with the perfect lure for the hatch that morning into an area where there are no fish, you will not catch a fish! When working livestock, the key point is, “you will get what you cause.” Whatever you do is what you get. If you work at the proper angles with the proper pressure, the livestock will go the direction you want. If you don’t, they are much less likely to.

And its reverse (the one I heard the most) is, “The fish aren’t there.” I especially loved Grey’s tone of voice when he said this one, always to me because I tended to not get my cast close enough to the bank (where the fish are!). I would make a beautiful cast, perfectly mend it, and Grey would resignedly say, “the fish aren’t there, cast again.” When you pressure into an animal or group of animals, you have to keep going until you get a response, then you can work from there. If you are doing anything and they aren’t responding, you need to get closer and find the spot from which to work them. Otherwise, they will just either not respond or, worse, will get annoyed with you. 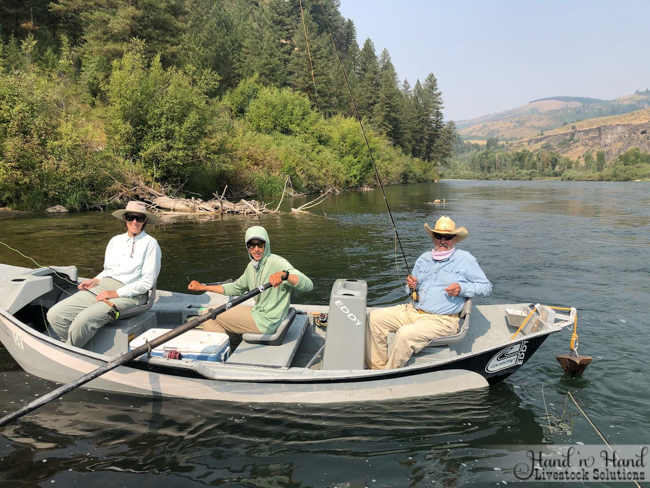 “Keep your line tight; loose line is your enemy.” I heard this one a lot also because I tended to focus on one thing to the detriment of others. I would be thinking about the angle of my elbow for the cast and forget that I had line all over the place needing tending. This most often led to tangles either on my own rod or involving Richard’s as well. Grey always knew to cut the lure of the person who had caused the tangle so the innocent fisherperson was back at it while the tangler had to wait for Grey to re-tie their fly. Who am I fooling, it was always me causing the tangle! I remember once watching my fly wrap at warp-speed ‘round and ‘round Richard’s rod and then insert a double half-hitch at the very end. What skill! When working livestock needing some skill such as settling newly received or weaned calves, you must always “keep contact” with them. This means working them in such a way that they always know you are “there” and your movements are coordinating with their movements. This “contact” is really important in most livestock handling. Although there isn’t a “physical line” running between you and the livestock, there is a “mental line” there. Keep it tight enough so they know you are working them. This will help keep you from getting tangled up. 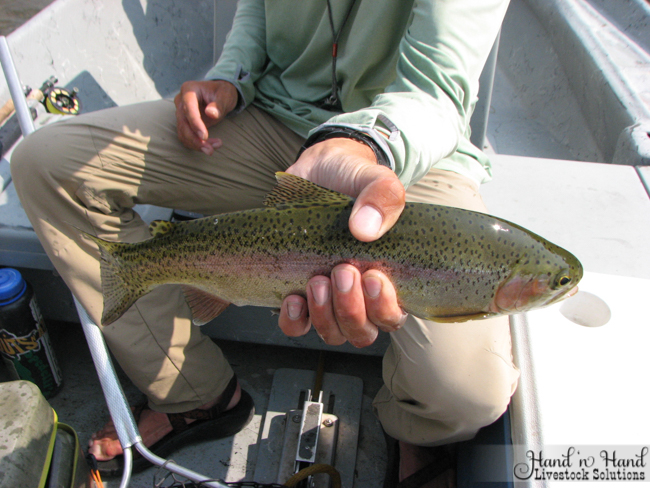 “Watch everything at once.” I’m not sure whether Grey actually said this or whether I just realized that I had to do it. Mending my line was a totally new technique for me, so at first I was spending most of my focus on my fly line and not nearly enough focus on my lure. I’m sure I missed seeing several fish at my lure which could have been in the net but, instead, happily went along their merry way after mouthing my artificial lure and then spitting it out unscathed. Once I realized I could and should watch my lure and my line at the same time, I’m sure my percentage of catches came up. At that point, I also realized it’s exactly like working livestock where you have to watch all the animals in order to make decisions about where and how to move to get the response you want and need. Remember Dad’s Round Rock Collection? He said this about them, “If you open your eyes and see everything instead of focusing on individual things, you will be able to see what all of the animals are doing and still be able to see the ground well enough to be able to tell that this rock is round.” Keep your eyes open, look at everything, respond appropriately, and you will catch the fish and gather the cattle.

“Attitude is everything!” I’m not sure how the fish realize your attitude, but I’m quite certain a positive attitude is everything in fly fishing just like it is in properly working your livestock. If you aren’t in a good frame of mind, leave the fishing and livestock working for another day. Go fix or build fence or bang on something until you are in a better frame of mind, then head to the river or the livestock.

“It’s not the fault of the fish you aren’t catching any.” Grey didn’t say this one in so many words either, but I’m sure he understood it. We always say in our classes, “the livestock are never wrong; you caused whatever you got.” If I didn’t cast where the fish were and take care with my lure and line, I wouldn’t catch a fish. That’s it! It isn’t the dumb fish or the dumb cow; it’s me! The neat thing about that is, I have full control over me! I can change until I can catch fish and work livestock.

“Get your line ready for the cast before you cast.” This was one of the ten main points Grey made to us. Prepare, prepare, prepare. Be ready, get things in order, and then do them right. This would apply to everything we do in life, and it certainly applies in fly-fishing and working livestock. Teach your livestock to take pressure before you get them into situations of pressure. Gather them properly, and the day will go well no matter what you need to do with them. Sort them properly and the weaning will go great. Once I had more practice with the casting, I found I could know on the back-stroke whether my cast was going to be good or not even before I moved forward. I was reminded of Whit Hibbard saying he could tell whether the cattle would “place” properly or not by how they drove to the spot. You can just “know” these things by how it’s going in the middle of the process once you really get into the zone.

“When you are tangled up, do not cast!” I heard this one from Grey a lot. I’d cast and begin to wonder where my line went and Grey would say, “don’t cast,” because my line was wrapped around something! Sometimes I could hear the tiniest note of panic in his voice, because he knew the mess it would make if I didn’t hear him or he said the words too late! Sometimes his tone was more resigned as I’m sure he was thinking, “will she ever learn to keep her line tight and untangled?” When you are working livestock, and it starts going bad, back up. Don’t cast; don’t make it worse. Regroup, untangle your line, think about it for a minute, and then step in again.

Working livestock with Proper Stockmanship, just like proper fly fishing, can be a fun and productive way to spend your day. Rise to the challenge, follow the rules and techniques, have fun, and get the job done properly. 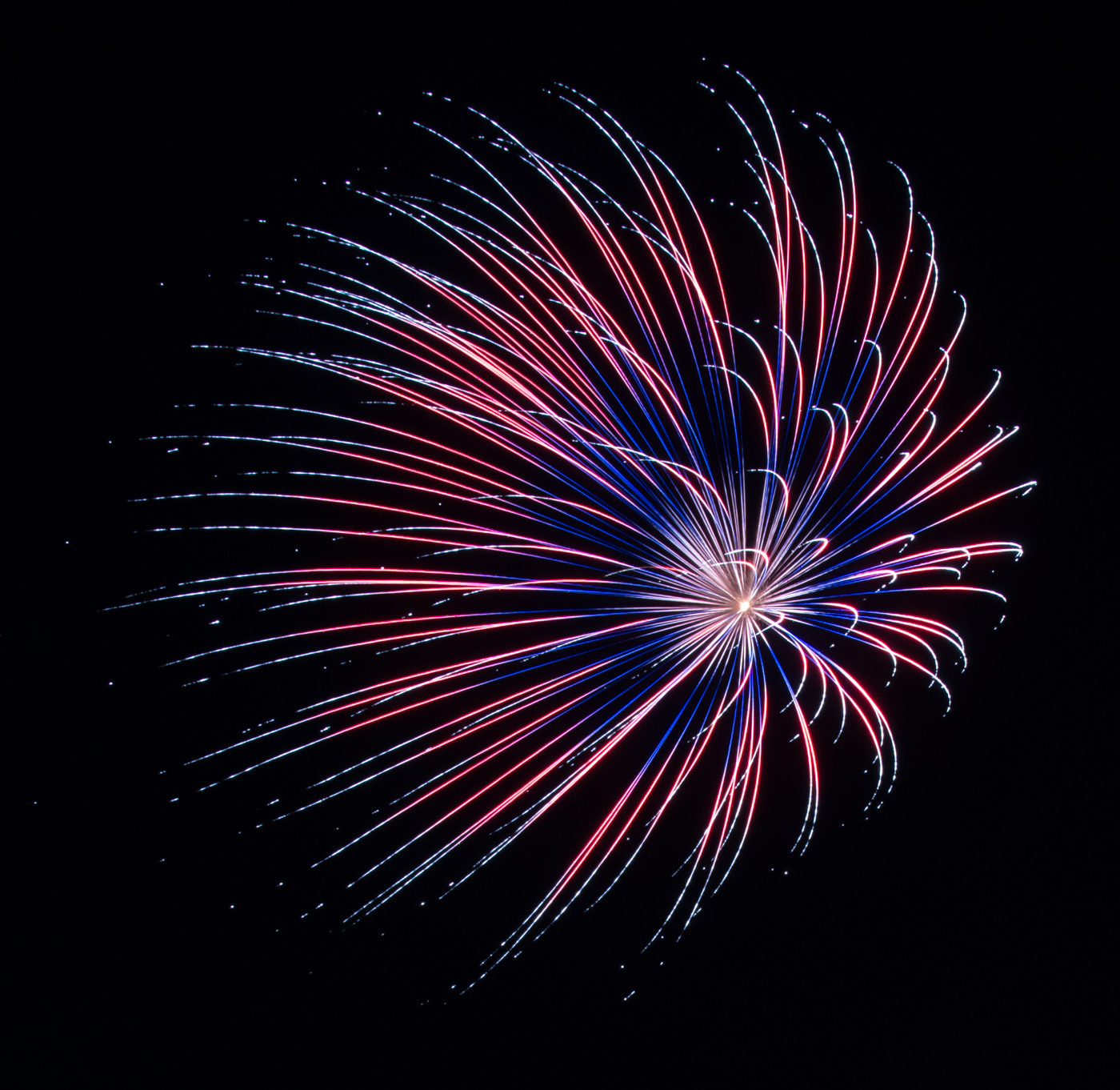 This Christmas as we gather with loved ones far and near, let’s pause a moment to praise God for all we hold so dear. May

Thanksgiving For each new morning with its light,For rest and shelter of the night,For health and food,For love and friends,For everything Thy goodness sends. —Ralph

We had a small group of very interested folks at this school. We also tied the trip in with a stock dog trial, visit with

This holiday is about more than hot dogs and hanging out on the lake. Have fun, but also pause to remember the reason our forefathers